I was in Montreal two weeks ago and took some time for photography. Here are some of my favourites.

The first one is the interior of Place des Arts metro (subway) station. To get a wide view, I used a Canon 24 mm shift lens to take three pictures: one shifted left, one centre, and one shifted right. Then I combined the three pictures into one frame. (It's like doing a spin panorama, except that the camera remained stationary and the lens was shifted instead, which means that there is no perspective shift from one frame to the next.) I also exposed each frame three times: one normally exposed, one underexposed, and one overexposed, then combined the three exposures into one frame; this allowed me to retain detail in both the shadow and highlight areas of the image. So the following picture is made from a total of nine exposures.

The next picture is of the Chalet du Mont Royal. This was a tricky picture to make, because the ceiling was very dimly lit, while the view out the window was bright and sunny. So again, I made three different exposures (one for the shadows, one for the midtones, and for the highlights) and combined them into one. The camera was on a tripod so that the three images line up properly. This was a large, expansive room, and I used a shift lens (shifted up) so bring in more of the interesting ceiling and less of the boring floor. (Why shift? I could have simply tilted the camera upward, but then the vertical lines would not be parallel. See here for more information on perspective correction lenses.) 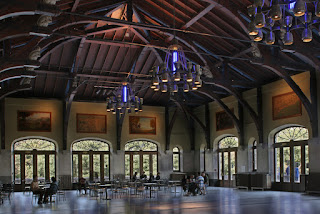 Outside this chalet is a lookout over the city, called the Belvedere Kondiaronk. This has always been my favourite spot to take pictures of the city. I took two pictures here, one a traditional image and the other with exaggerated perspective that adds a bit of drama. 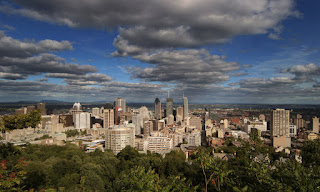 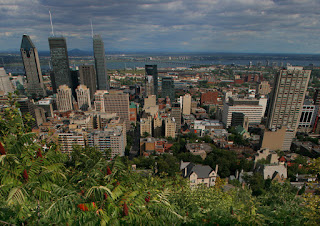 Back now to where we started, Place des Arts, where the Montreal World Film Festival would begin just a few days later, and also where the Musée d'art contemporain (Museum of Contemporary Art) is exhibiting the works of Bruce Nauman. These pictures were also combined from several different exposures. 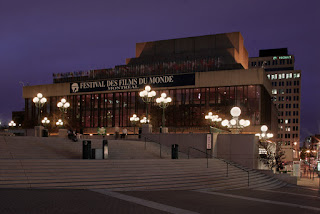 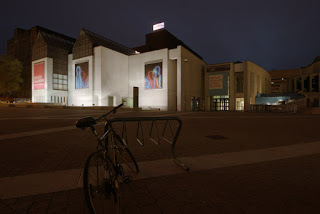 You can click on any of the pictures to bring up a larger view in a new window.
Email Post
Labels: Photography Travel

A hamburger walks into a bar...