Bringing out shadow and highlight detail in photographs

One of the technical challenges facing outdoor photographers is keeping detail in both the shadow and the highlight areas of a picture. This problem occurs frequently when part of the scene is brightly lit by the sun, while another part is in deep shadow. The limitation is common to both film and digital: only a limited range of tones from darkest to lightest can be captured. Outside this range, dark tones go to pure black and bright tones go to pure white.

It is tricky to capture such scenes in a single exposure. You can choose a longer exposure in order to maintain detail in the shadow areas at the expense of highlight detail. Or you could choose a shorter exposure and maintain highlight detail but lose shadow detail. Either way, the picture is not likely to turn out too well, as illustrated here, where I was inside a dark cave looking out into a brightly sunlit area:

Fortunately, I anticipated this problem at the time, and I was prepared to solve it from the first step. I made two images less than a minute apart, with the camera on a tripod to ensure an identical composition. I later used Photoshop to combine them into one image, using the first picture for the interior of the cave and the second picture for the sunlit exterior, and tweaked the result until the exposure was just right: 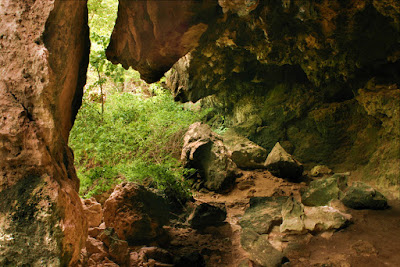 This combination of the two "before" exposures has correct exposure throughout the frame.

The "after" picture is a much more pleasing photograph because it shows detail in all areas of the image, revealing depth and texture better than either of the original images.

So the next time you face an impossible exposure situation, try taking two different exposures and combining the two to bring out detail in the shadow and highlight areas.