Every episode of House, right here 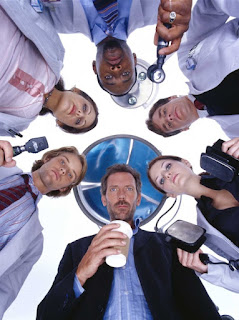 In case you missed last night's episode of House (the medical drama starring Hugh Laurie), or last week's episode, or the episode before that, here is a summary of what happened:


A fun event, in which children and/or the elderly are actively participating, suddenly turns dramatic as one of the participants collapses. This person exhibits a series of symptoms that are rarely seen together.

Elsewhere, House is engaged in a social situation with one or more of his colleagues. During the course of conversation, they exchange innuendo and double entendres that relate the social situation to general human sexual activity, while also drawing poignant comparisons between the male and female psyche.

House punctuates the drama with an annoying story.


House and his colleagues are interrupted by a doctor or nurse, who runs into the room and breathlessly informs them of the patient's admittance to hospital and the symptoms they are exhibiting. This doctor or nurse is a walk-on extra whose only prior acting experience was as a security guard on that one episode of Star Trek: The Next Generation.

Without needing to examine the patient, one of House's colleagues offers an immediate diagnosis that the viewer knows is both simplistic and wrong. House accuses his colleague of jumping to conclusions. He does not do this verbally, but with a glare.

Still dressed in the clothing that was appropriate to the social setting, House goes to see the patient. During the course of his examination, he makes insensitive and insulting comments to the patient, the patient's parents (if present in the room), the patient's children (if any), and anyone else who has ever known any of them. The camera pans away before we see their reactions, which would normally be horrified but in this case seem strangely understanding and respectful, because House is the greatest doctor ever.

Within minutes, House diagnoses an extremely rare condition that nobody, including anybody on the editorial staff of the New England Journal of Medicine, past or present, has ever heard of. It has a name like homeo-regenerative microcorpusculosis. We learn that there are fewer than 50 cases of this disease in all of recorded medical history. The hospital has not seen a disease as rare as this within the past 6 days and 23 hours.


Unburdened by the caseload that one might associate with a major urban hospital, four doctors find the time to gather in a conference room, where House writes the patient's symptoms on a large white pad supported on an easel.

The other doctors suggest one diagnosis after another. House dismisses every suggestion, taking the opportunity each time to insult his colleagues' intelligence and/or education and/or appearance. The meeting ends with three doctors diagnosing food poisoning, while House stubbornly stands by his earlier diagnosis of homeo-regenerative microcorpusculosis.

Following the meeting, the doctors return to their social engagement, still in progress. House joins them reluctantly and/or stays in contact by cell phone and/or stays behind to furrow his brow and peruse the situation.

Moments later, they get news that the patient has been transferred to the Intensive Care Unit because of the sudden onset of a terrible symptom which, although inconsistent with food poisoning, is precisely what one might expect by a sufferer of the rare disease that only House could diagnose. But darn if it didn't happened several hours sooner than he expected. 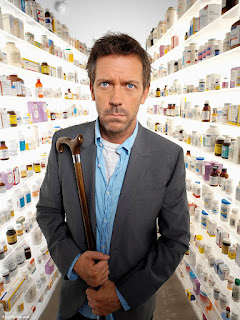 House bursts into the room and brashly announces that the patient is going to die a terrible, painful death within hours, unless a radical course of treatment is begun immediately. Although this treatment is experimental and unsupported by any medical literature, and a possible side effect is liquefaction of the liver and kidneys, House insists that it is the only way to proceed, or the patient will die!!!

One doctor dares to object. In response, House utters a racist and/or sexist and/or derogatory slur, then hits the offending doctor across the arm and/or leg with his cane.

Suddenly, the patient can't breathe! All the other doctors rush to re-open the patient's airways, while House simply looks on sadly, because he just knew this was going to happen.


The doctors have gathered back in the meeting room, where they continue to argue over the diagnosis. A minimum of four previously-unknown conditions are suggested, and quickly dismissed. The conditions include one genetic disorder, one rare form of cancer, and two distinct conditions affecting the immune system in a specific non-specific way.

House reluctantly agrees to test for the other conditions, but makes it clear that it is a waste of time. The dilemma is that the rarer the condition, the less reliable the test to definitively diagnose it. Besides, he had already diagnosed homeo-regenerative microcorpusculosis; there is nothing more to test.


House makes a bad pun and/or is seen riding his motorcycle and/or broods.


Reference is made to a classic literary work, such as Moby Dick, which serves as a metaphor for the current situation within the broader context of the meaning of life.

House reminds his colleagues that the last patient who exhibited these symptoms died within hours, because the condition was diagnosed too late. House finally has a chance to get over that loss by curing the new patient.


House begins an unorthodox and highly risky procedure. The patient immediately goes into cardiac arrest. It takes 360 kilojoules to resuscitate the patient.

Undaunted and unwavering, House proceeds with the treatment. The patient suffers paralysis and/or brain damage and/or a collapsed lung, but will make a full recovery by the end of Scene 9.


House is ordered off the case by the hospital administrator. He continues with treatment anyway. This may require locking himself in the room with the patient while his colleagues pound their fists on the shatterproof glass door. Later, when House is proven right, all will be forgiven.

For no apparent reason, House makes a gravely insulting comment to the patient's family, perhaps blaming them for the illness. We do not see their horrified reaction, though, because the camera pans to the patient, who is lying down, eyes closed, asleep and/or dying.

Meanwhile, the doctors begin to realize that House's original diagnosis may indeed have been correct, and that they had simply run the test incorrectly. They repeat the test and, this time, confirm House's diagnosis.

House is finally given the resources he needs to treat the patient for the condition that he initially diagnosed. The patient is cured within minutes. The patient's family thanks House profusely, and forgive his rudeness earlier.

House makes one final attempt at sexual innuendo as the camera pans to the patient, now sitting upright and smiling.

Deb said…
But we have to admit that Hugh Laurie can brood better than anyone else on tv these days.