I was in the U.K. a few years ago, and noticed that the water kettle and steam iron in my hotel room seemed to warm up much more quickly than the appliances I use here in Canada.

It turned out that U.K. receptacles nominally supply 230 volts at 13 amps (that's 2990 watts), while Canadian (and American) receptacles nominally supply 110 volts at 15 amps (1650 watts). This is why North American kettles typically draw 1000 to 1500 watts: any more and they would pop a fuse. Whereas the heating element in a British water kettle can draw nearly twice as much power as a Canadian one, which means heating the water twice as quickly. In fact, most of the world runs 220 to 240 volts in all their receptacles.

The experience spoiled me. In the three years since I returned to Canada, I have been impatient waiting for water to boil. Finally, I decided to do something about it. 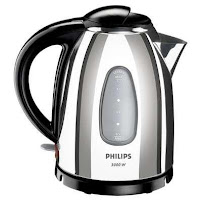 I bought a 3000 watt water kettle from amazon.co.uk. They don't ship to Canada, but a friend in the U.K. very kindly forwarded it on to me. Then I had a 242 volt, 15 amp line (that's capable of supplying 3630 watts!) run to my kitchen. Right now it's wired directly into the wall as I don't have the right receptacle for it, but I'm working on that.

Now I'm boiling a half-litre of water, enough for an extra tall mug, in under a minute! I'm drinking tea when I'm not even thirsty, just to use my new kettle. I have not been this excited about a small appliance since... ever.

So what next? Well, I am considering tying three lines together and upping the voltage to 363 volts to see what happens, because why not. If I get around to doing it, I will post the result on my blog. Hopefully the kettle won't melt.
Email Post
Labels: Happy Home Shopping

Deb said…
Remember that tv program, Home Improvement, where the guy was always trying to fix things around his house, with hilarious results?? I just had a flashback.

Parker Edward said…
This comment has been removed by a blog administrator.
August 31, 2018 1:17 am

chenelle shoaf said…
This comment has been removed by a blog administrator.
March 27, 2019 4:26 pm

Sassan Sanei said…
Fascinating! I never knew my water kettle would be of such great interest to spam bots.
April 03, 2019 2:24 pm

A hamburger walks into a bar...