The most unfortunate banner ad placement ever

I'm willing to bet that ABC News's web site uses an automatic, intelligent method of placing banner ads on each page of their site that might be of the most interest to a reader of a particular article.

For example, an article about rising home prices might be accompanied by a banner ad from a financial institution offering low mortgage rates. The idea is that the advertising is relevant to the viewer. This is often accomplished automatically by looking for keywords in the article that are associated with the ad: the mortgage-rate ad would register keywords like home, bank, interest, loan, finance, refinance, and of course mortgage.

This concept is not new to the Internet, of course. Just last night, ABC's television network ran a one-minute commercial from Bank of America describing themselves as promoters of women's rights ("the first bank west of the Mississippi River to offer banking services to women") during none other than the popular show Commander In Chief, which depicts the first female president of the United States.

Other examples of targeted advertising on the web might include advertising for Weight Watchers adjacent to an article about the obesity epidemic, an ad for Colgate toothpaste accompanying an article about dentistry or parenting, or a banner ad for Hydroderm skin clarifier ("boosts your skin's natural glow, tone and texture") next to an article about 13-year-old white supremacists and Nazi sympathizers Lamb and Lynx Gaede, two singers better known as Prussian Blue, the darlings of the KKK and rapidly gaining fame and notoriety for their music preaching a message of hate and anger --

That's right. I couldn't possibly be making that up. That is the most unfortunate banner ad placement ever. Just look: 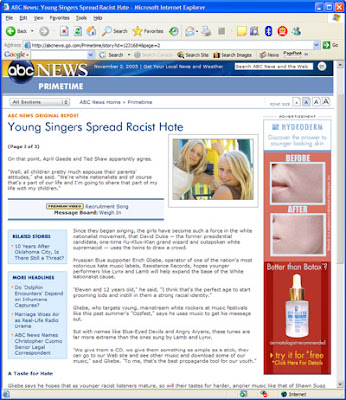