Everyone is a worse driver than me

I live in a small city and close to work, which means that I don't need to drive very much. And when I do, it's usually only for a short distance. So it amazes me that, at least once a day, I encounter a clueless driver who arrives at an intersection and has NO IDEA who has the right of way, or how they should proceed.

I'm not talking about people who run yellow lights, or those who wait several seconds after the light has turned red before completing their turn: they know better; they just choose to drive badly. I mean the ones who are genuinely perplexed - and either proceed into the intersection when it's not their turn and risk a collision, or just sit there and keep everyone else waiting.

Since I know that every bad driver in Waterloo reads my blog on a daily basis, I proffer this guide to handling tricky intersections.

Take the quiz and see how well you rate! 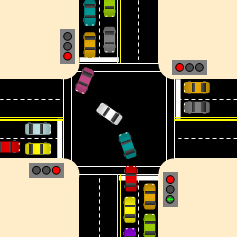 The correct answer is: B. The driver turning left.

The green left arrow always provides a right of way over the red light in the other direction. The driver turning right must wait for all left-turning cars to complete their turn before proceeding into the intersection. Even though a right turn is permitted on a red light, the driver must still stop and wait for the intersection to be clear before proceeding. Both drivers should avoid turning simultaneously into different lanes (a common error), because this presents a risk of collision. 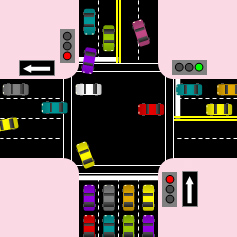 
A. Yes, as long as the intersection is clear.
B. No. The driver must wait for a green light before making the left turn.

The correct answer is: A. Yes.

The fact that Caroline and Erb are two-way streets west and south of the intersection is not relevant to this question (although it does mean that a left turn on a red light is not permitted from northbound Caroline onto westbound Erb). 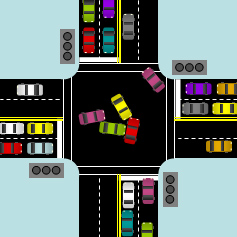 Due to a power outage, none of the lights at the intersection of Weber and Columbia are working, and there is no police officer directing traffic. There are many cars lined up to the intersection from all four directions. In what order do they proceed?

The correct answer is: C. One car at a time proceeds, taking turns clockwise.

When the traffic lights fail, the intersection is treated exactly like a four-way stop sign. One car proceeds into the intersection, then the car to the left proceeds, and so on. This process is slow, but there is no risk of collision.

Because traffic is often congested during a power failure, drivers often try to improve traffic flow by making up rules "on the fly" - for example, several cars proceed at once from each direction. But since these made-up rules are not known to any other driver, the risk of collision increases dramatically. Remember, it's like a four-way stop sign - one car at a time. 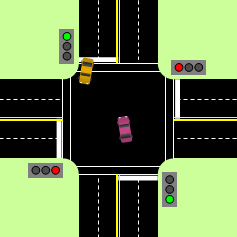 A car is stopped, waiting for oncoming traffic to clear in order to complete a left turn from King onto University (westbound). As traffic clears, another car arrives at the intersection from the opposite direction, indicating a right turn from King onto University (also westbound). These are the only two drivers in the intersection, and they both have a green light. Which car turns next?

The correct answer is B: The driver turning right.

5. Where should you stop? 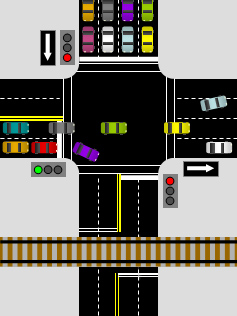 A car heading north on Caroline is faced with a red light at Erb, right after the railway tracks that also intersect with Caroline. Where should the car stop?

The correct answer is C: Between the railway crossing and the intersection.

The red light indicates a stop for the intersection at Erb, not for the railway crossing. The double white lines before the railway crossing indicate where to stop in the presence of a train, and have nothing to do with the intersection up ahead (which has its own single white line). It is acceptable to cross the tracks and come to a stop at Erb, provided of course that your car does not overhang the tracks.

A surprising number of drivers stop all the way back behind the tracks. This is unnecessary and it only holds up traffic, because it prevents other cars lined up behind from making the right turn on the red light at Erb.

Thanks for taking the quiz! If you disagree with any of the answers, you can either get off the road or use the comment link below to share your insight.
Email Post
Labels: Cars Rants Trivia

neal said…
the final question (and corrosponding picture) is misleading...

Sassan Sanei said…
Thanks Neal. You're right. I just added a note to the question that the intersection is empty when the car arrives, and tied each answer to a specific car in the diagram. I hope that makes it clear.
March 18, 2006 7:54 am