I always take a camera with me when I travel. Occasionally I take a snapshot that doesn't turn out quite the way I wanted, and I'll wish that I had taken the picture a little differently. Of course, by then I'm back home, and it's too late to take the picture over again.

Fortunately, it is easy to use photo-editing software to correct my little mistakes.

The "Before" picture below is generally underexposed. The sky is the correct exposure, but the main subject is far too dark to show any detail. Also, I was holding the camera tilted upward, which made the buildings crooked - they look like they're falling into the street. 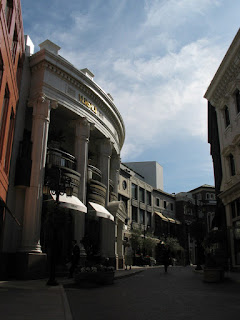 For the "After" picture, I corrected the perspective so that vertical lines run parallel. Then I lightened everything but the sky. The parts of the scene that were in shadow received further lightening, as well as a warmer tone and increased colour saturation. 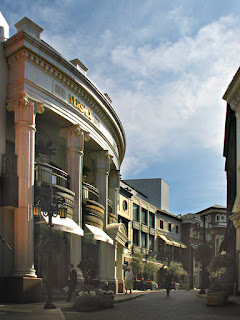 The end result is much better than the original, and more closely represents what I remember seeing in person. It may not win any awards, but at least it is a nice souvenir, which is more than I had with the original image.